I have to say that the quick access feature in KDE 4.2 is very, very nice. It really boosts my productivity by allowing me to traverse file structures very quickly and intuitively. 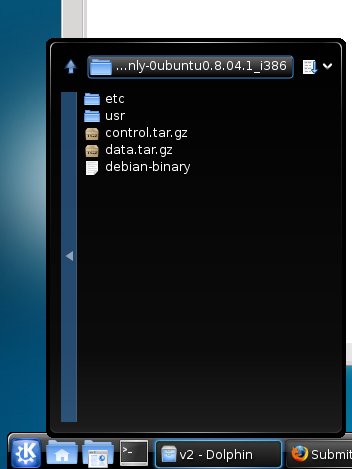 If you're using Kubuntu with KDE 4.2 and keep getting an error when akonadi starts up, which lists "Akonadi server process not registered at D-Bus" as the first error, try the following:

Kubuntu uses apparmor to block certain actions on the system. The new akonadi system KDE uses attempts one of these actions. The commands above simply tells apparmor to log the action rather than block it.

to stop the service, then

KDE 4.2 was released for Kubuntu on the 27th of January, 2009. This was a big deal because the 4.0 release, typically the "ready" release, was not so ready, and a bunch of nerdy types were not very happy about it. Being a software developer, I understand that a complete re-write, as 4.0 was, will have it's problems.

I use Kubuntu at work 10 hours a day/ 4 days a week, as well as at home, and I took the brave step of upgrading in a production environment, after testing at home first on a similar configuration.