gFTP is an open source graphical FTP client. It has a nice user interface and is easy to use. I've had problems with it doing large ftp transfers, so in those cases or cases where I want to transfer server to server, I use kasablanca. The GUI is a bit clunkier and is lacking some features, but it is best for certain situations.

The Gimp, or GNU Image Manipulation Program, is an excellent, free image editing software package for Linux, and Windows. As far as I can tell, it does everything the big name programs do, except allow the creation of shapes. Coming from Fireworks, it was tough to get used to. But you can create vectors and areas, and then fill them. While I am not a professional, I did create this graphic using The Gimp.

In Kubuntu or KDE (I think...at least with Beryl), a window can get positioned so that you can't grab the title bar (the bar up top that has the menus on the left and right). To move it, hold down ALT and click anywhere on the window and drag.

Shading a window will collapse it into the title bar. To do this, double click on the title bar on top. You will be able to fit a ton of windows on a desktop and not have to go to the task bar, or use the ALT + TAB combination to cycle them. Simply double click them to "unshade??" them.

The housing market in Washington State is terrible as it is in many places around the company. Real estate prices are skyrocketing out of control in this area (the greater Puget sound), way beyond what most people can afford. There are "condos," glorified apartments really, selling for $175,000 in some of the worst areas in these parts (Casino Road for the locals). These apartment conversions were built in the 60's, are barely 1000 square feet and are, as mentioned, located in one of the worst parts of this area. A house is going to set you back $300,000 dollars minimum.

After a comment from a reader, I have finally realized the major flaw in the way MySpace does business, especially with minors.

A concerned parent wrote asking about access to her child's private MySpace profile. Her child does not login to the computer at home, but in other places such as friends' places. But because her daughter has a private profile, she can not access it.

As I thought about the reader's problem, a major issue with MySpace finally became clear.

C|Net News.com is reporting today that Dell is now offering Ubuntu Linux as an option for new computers. The article reports that Dell has attempted this before with little success. However, after actually listening to the consumers and realizing that Ubuntu has made great strides towards being a contender for the operating system of choice for the average consumer, Dell is giving it a try once again.

To get real time system information from most Linux systems, use the command top. Open up a command prompt and type top. You'll get a updating readout of processor percentage used, memory percentage used, the amount of memory used by process. There are many ways to sort the list and you can kill processes as well (if you run the command using sudo or root). 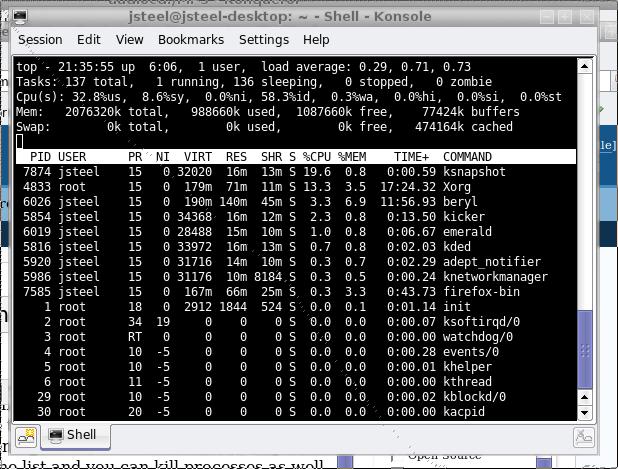 A must have tool for web developers is Quanta Plus, a multi-purpose development tool. It supports code highlighting for many languages and applications, FTP, projects, plugins and much more. To be honest, I have barely scratched the surface of it's capability. Half the time, it is easier to open a document in Kate and edit it. Kate is the notepad of Linux, but on steroids.

Kopete is a multi-network, multi-account instant messenger client for use with Linux systems. I run Kubuntu Fiesty Fawn and use this exclusively. I have two msn accounts, a yahoo account and an AIM account. Kopete supports 11 IM clients out of the box.