By the way, I don't have to use a compiled video card driver. I choose to because the proprietary Nvidia driver has built in support for Beryl, a visually stunning set of enhancements to the GUI. While running Beryl with my Nvidia driver, the load on the system is less then not running Beryl, mainly because the graphics card handles the display and not the main CPU.

Anyway, to install software, all you have to do is go K Menu -> System -> Adept Manager. It's at the top. 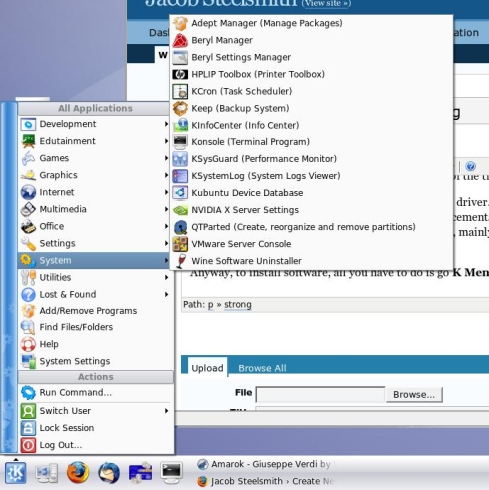 After entering your password (because you never run as an administrator, or root as it's known in Linux, unlike Windows, to prevent damaging changes to the system), you are presented with a screen similar to this: 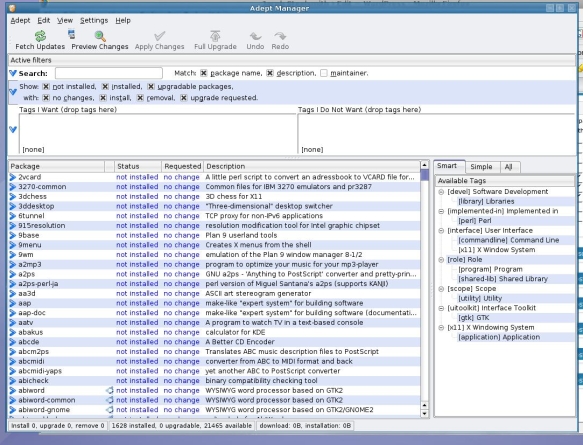 To look for a program, or package as their called, start typing in the search box at the top. I'm going to search for chess. 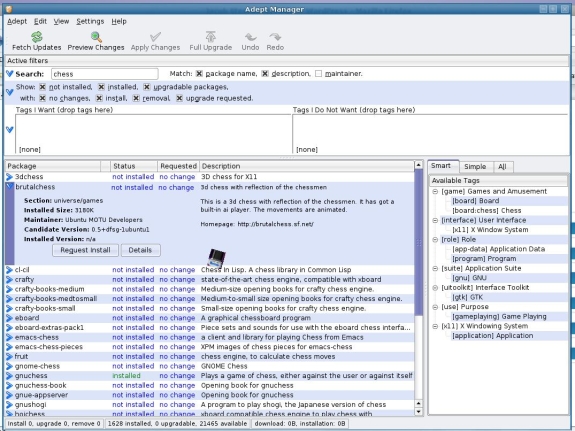 To install the program you want, click on the > next to it. You'll see a button that says request install, along with a description of the package. Once you click request install, it will check for conflicting packages, and if they are found, it will not let you, but that rarely happens. Once the requested column says install, click apply changes at the top and it will download and install your software. 99% of the time, you will not have to reboot Linux (one advantage of a properly implemented operating system).

By the way, you'll notice that I have 21,000+ packages available. This will vary depending on which repositories or sources you have enabled.

Once you install the software, it will either appear in your menu or you will be able to access it via a command line.

Updating occurs automatically. You will see an icon appear in your tray that looks like an exclamation mark with a triangle around it. Just click that, enter your password and click fetch updates. You will see a list of packages that are available for update. If the kernel is in there, and you have compiled packages like I do, keep in mind that you will have to recompile the software (in my case vmware and my nvidia display driver).